About 'Letter to Kamilla'

"Exactly eighty years ago, my great grandmother Kamilla wrote a letter to her children. It was July 1942. Fortunately, her children had escaped Nazi-occupied Austria, but Kamilla had not been so lucky. She endured four terrifying years of brutality and unimaginable suffering. The letter to her children was the last thing she wrote before being sent to Theresienstadt then Auschwitz, where she was murdered. She did not know if her letter would ever reach her children.

Eighty years later, my vocal ensemble, Mosaic Voices, is writing back to her in the form of an album of Jewish songs. We want Kamilla to know that, although she, her husband, and her sister, Minka, lost their lives in the Holocaust, all her children survived, and lived their lives successfully and happily in Britain, as proud Jewish people. Hitler’s mission had failed.

Her touching letter, which Kamilla wrote in German, has been set to music as one of the songs on this album (Letter from Kamilla). The other tracks that we have chosen to record celebrate the diversity, mysticism, and beauty of the music that Jewish people have brought to the world over time."
​
​Michael Etherton, Musical Director, Mosaic Voices

Kamilla Breuer was born into a middle-class Jewish family in Vienna, Austria, in 1882. Her life was centred around her family whom she adored, doting over her two beloved children, Lotte and Jozsi. She was especially close to her older sister, Minka (see photo below). Kamilla was married to a civil servant, Emil Breuer, twelve years her senior, who worked for the post office. The family was native German speaking, and well-integrated into Austrian society, living normal and comfortable lives in a large European city. At the outbreak of war in 1939, Kamilla was 47 years old. She is the great-grandmother of our musical director, Michael Etherton. 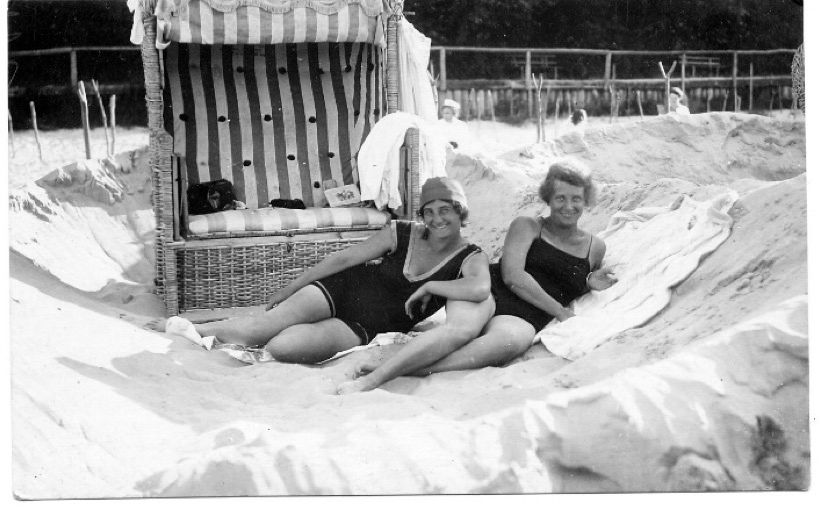 Kamilla (right) and her sister Minka on holiday in the 1920s
Kamilla’s 20-year-old daughter, Lotte, had met her fiancé, Dezso, in the spa town of Baden. Lotte was a glamorous and independent minded young woman. Dezso was sporty young man from out of town, staying with grandparents in Baden. He played hockey for a major Austrian team, and in the evenings he also played banjo in a coffee house swing band. Now they were due to get married on March 6th 1938, a few days before the Anschluss, when Austria was annexed into Nazi Germany. They were married at the central synagogue in Vienna. Lotte and Dezso, excited at the start of their married life, left Vienna for a honeymoon in Sicily. 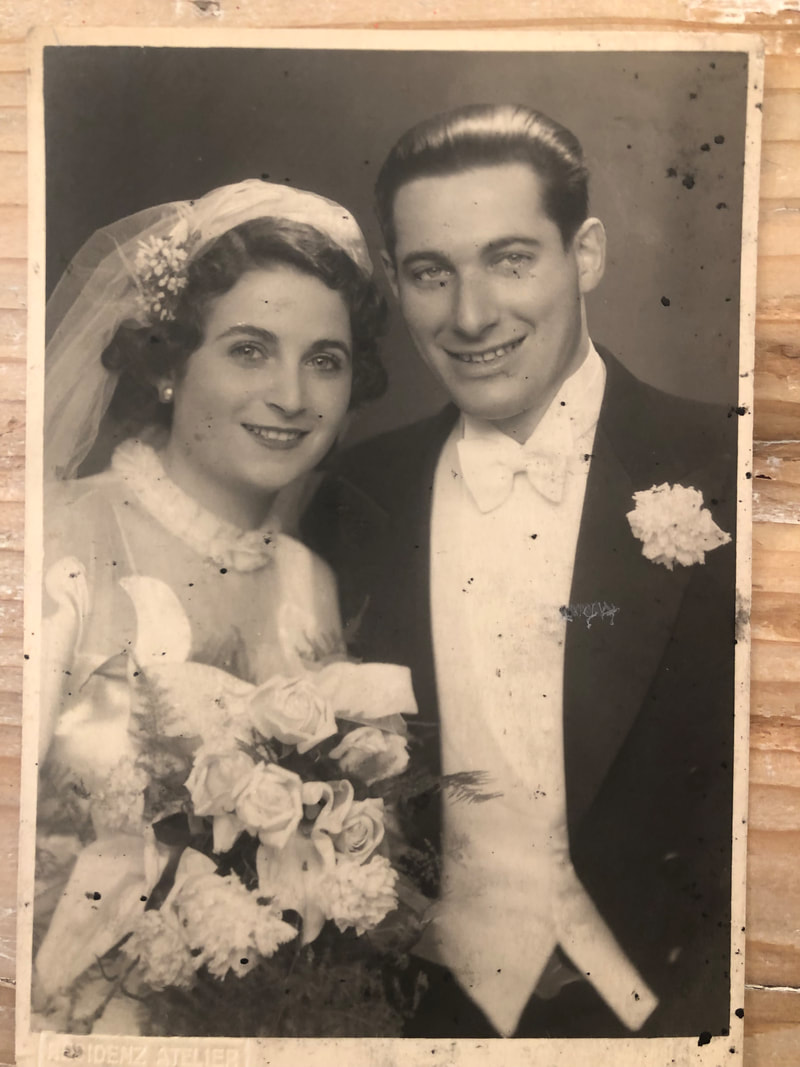 Wedding day in Vienna, March 1938: Kamilla's daughter, Lotte, and Lotte's new husband, Dezso
Whilst her daughter and new son-in-law were away, a process of harassment and persecution of the local Jewish population got underway very quickly . In the first week, Jews faced an outburst of brutality, violence, and plundering of their assets. Jewish women were forced to scrub political slogans from the previous Austrian government with their bare hands or with toothbrushes off sidewalks, Jewish children to write the word "Jud" on the windows of their parents' shops, orthodox Jews were pulled around by their beards. These attacks ended soon, but more and worse was to come. Shocked by this new reality, Kamilla urged Lotte and Deszo not to return to Vienna but to seek refuge in another country.

From May 1938, Jews were gradually robbed of their rights as Austrian citizens, blocked from almost all professions, shut out of schools and universities, and forbidden from marriage with non-Jews. By mid-June, Jews had already been removed from public life, more thoroughly than in the five years of Nazi government in Germany. Tens of thousands of Jewish employees had lost their jobs. Hundreds committed suicide.

Kamilla was eager to write regularly to her children. Kamilla was always thrilled on those occasions when she received a letter from her daughter:

“At last, after four weeks of waiting, we received your dear letter and you can imagine our joy. It is like a ray of light when we get news of you, and we beg you to write more often.” (Kamilla, 18th May 1940) 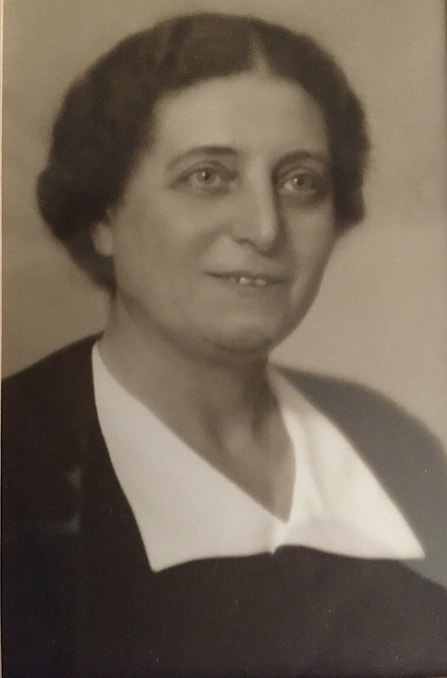 Kamilla Breuer at the outset of war in 1939
Daughter and son-in-law Lotte and Dezso moved first to Milan where they tried to find work and to acquire permission to enter the UK. Lotte was the first to succeed and she set off alone to take up employment as a domestic servant in the north of England. Dezso remained in Italy for eleven months and eventually found work as a gardener in the Quaker school where Lotte was working in Glossop, Derbyshire. 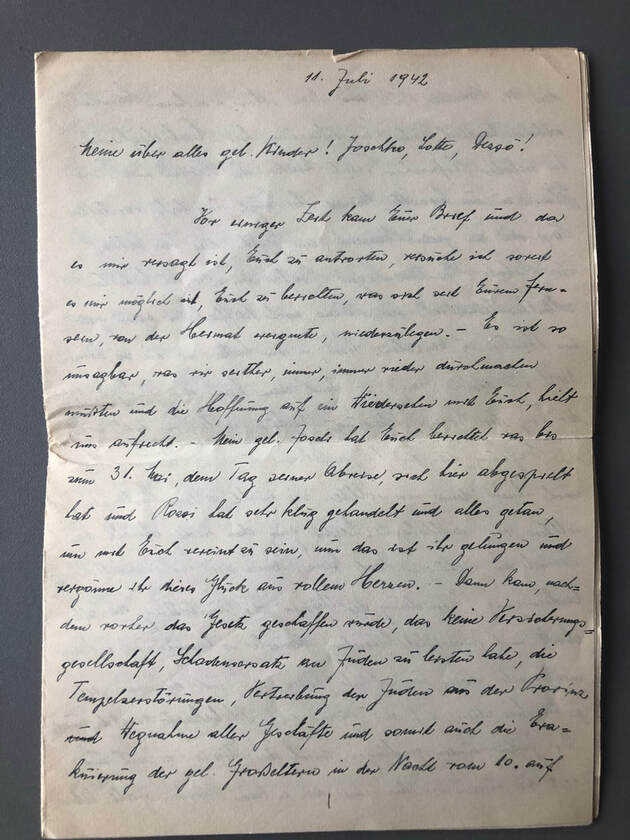 ​In her letters to her daughter and son, Kamilla refers to the "racial laws", including those prohibiting Jews from entering most public parks, and later coffee houses, cinemas, or places of entertainment. By the end of September 1938 Jewish lawyers and doctors lost the right to have non-Jewish clients or patients. By December 1938, most Jewish shops and business had already been appropriated or assets seized.

Nazi violence resumed again in early October 1938, when thousands of Jewish families were evicted from their homes on the eve of Yom Kippur. In mid-October, several places of worship and Jewish-owned stores were damaged. 'Kristallnacht' in November 1938  completed the destruction of the Jewish community's infrastructure and sense of having any expectation of being protected by the government or by fellow citizens.  All but one of the 24 synagogues and 70 prayer houses in Vienna were destroyed by arson, looted and desecrated. Over 4,000 shops were plundered. Nearly 2,000 apartments in the first district alone were ‘Aryanised’. 27 Jews were murdered, 88 seriously injured, nearly 8,000 Jews were arrested in Austria and sent to concentration camps. Synagogues were also burnt in all major cities in Austria.


Kamilla's final letter to her children, Lotte and Jozsi, and Lotte's husband, Dezso - 11th July 1942
​From September 1, 1941, Jewish people over the age of six had to wear a yellow star with the word 'Jew' written in a mock Hebraic script. This was designed to humiliate and separate Jewish people from the general population, and was adapted from custom in widespread use in the Middle Ages and Renaissance periods to identify Jews . Penalties for failure to wear the yellow star were severe, including death. Hence, in the music video of 'Letter from Kamilla', you will see that Kamilla is wearing the yellow star.

Many of Vienna’s Jews sought to obtain immigration visas. Kamilla however, refused to leave without her elderly parents, and this made her chances of escape far less likely. By the end of November 1939, over 120,000 Jews had left Austria but 66,260 Jews still remained in Austria along with about 30,000 "racial" Jews by ancestry according to Nuremberg Laws.

Deportation of Austrian Jews to concentration camps began in October 1939, shortly before legal emigration was stopped. The plight of those Jews remaining in Vienna worsened. Jews were forced to live in one area of the city, most were unemployed, their assets stolen, and they were now crammed into 'collective' apartments. Kamilla, who would have lived a relatively comfortably life until 1938, was by 1942, living in poverty and fear.

In her letter of July 1942 Kamilla refers to “the herding together of Jews into the Second District where there are often 5-6 people or more to a room, the huge impoverishment and with that the degradation of the Jews being called out by the stupidity and pointless dulling of the mind.”

It is also clear from her letters that they had to move flat more than once. Even in her final letter she talks about their moving at the end of the week, though it is not clear to where, or the circumstances and conditions of their new accommodation. In her final letter Kamilla also reveals that she knows they will sooner or later be 'shipped to Poland', and describes the process of how this is achieved in Vienna:

“..families are forced apart without consideration and must be packed up within a few hours (they only allow a rucksack or a suitcase, a bedroll containing pillow and blanket) and have to go to the Sperlgasse (the collection point). Everything else that is left behind in the homes, such as furniture, clothes, linen etc goes to the state. After the commissioning, one is given a number and shipped out to Poland.”

Although there are no further letters from Kamilla after July 1942, records in Germany and Austria were kept meticulously. For this reason we know that, on 9th October 1942, Kamilla and her husband Emil, and her sister Minka, and her father Leopold, were transported to Theresienstadt ghetto in Czechoslovakia. Conditions at Thereseinstadt were terrible and Kamilla's husband Emil and father, Leopold, succumbed quickly to disease.

Kamilla and her sister, Minka, fared better it seems, although who knows what suffering they had to endure. They were among the last transports of inmates to be taken from Theresienstadt to Auschwitz. In fact, Minka was not called up for this transport but chose to accompany her sister anyway. On 18th May 1944, Kamilla and Minka, were taken on transport Eb 2293 from Theresienstadt to Auschwitz where they were murdered, most likely soon after arrival, in the gas chambers.

Of the 65,000 Viennese Jews who were deported to concentration or death camps, only around 2,000 survived.